William Orange could be described as the father of the Anglican evangelical movement in Christchurch. He was among the founders of the Evangelical Churchmen’s Fellowship in 1946 (now Latimer Fellowship).

The aim of the Fellowship was to encourage evangelical thought amongst Anglicans throughout New Zealand. This is still the Fellowships’ aim today.

Though the influence of William Orange’s ministry was felt throughout New Zealand and further afield, especially in the mission fields of the New Zealand Church Missionary Society, his ministry was carried out almost entirely in Christchurch. 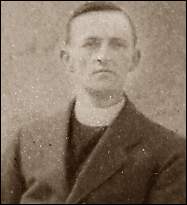 He was a modest, diffident man of small physical stature with a keen sense of humour. His gifted, anointed Bible expositions in All Saints’ Church, Sumner from 1930 to 1945, week by week attracted large numbers of young men from all over the city. They found their way there by cycle and tram. Many of them entered full time ministry or became missionaries.

He was a sought after speaker at student gatherings. His style of ministry, based almost entirely on direct Bible exposition became a model for the “Orange-pips”, who were influential in restoring biblical preaching to a central place in many churches.

Their influence is still felt in the lives and ministries of a large number of Christians in all denominations.

The latter years of William Orange’s ministry were passed at the Christchurch Cathedral, where his preaching drew a considerable following. When he died, his Library was bequeathed to the Latimer Fellowship.